There's no name for what this is

I'm an American living abroad and I don't know what the hell I'm doing.

I looked evil in the face in Rust, Germany

We went with a few friends to Europa-Park last Wednesday at the crack of fucking dawn so we could ride all of the good rides and not have to wait in gigantic lines with all of the little twerps who flood the park on the weekend. And it was reaaaally fun!

We walked to the Hauptbahnhof and to catch a bus to a town called “Rust”. It was there we met our friends (yes, believe it or not, we do have a few friends here assholes). Nothing unusual about this part of the story except for the fact that one of our friends indulged in an early morning coffee and donut from a nearby cafe and was warned after purchase that his donut was still FROZEN. He did not eat this donut until we got to our destination (an hour later!).

But before you start to wonder: NO THIS IS NOT THE EVIL THAT I SPEAK OF. I just think that it’s borderline psychotic that someone would hand out still-frozen donuts to innocent people and I want to shout it from the rooftops.

Anyway, we got to Europa-Park and the sun was shining and there were not many people there. It was fantastic. We walked around, got some pastries, stared at peoples dogs, and saw a group of Geese following around this old woman and her whistle:

Then we moved on to the roller coasters. I won’t go into details about all of them, just the two most important ones.

The Silver Star: this is the one that about killed me dead.

You go slowly UP UP UP high in the sky for what feels like forever. You hear the stupid scary sounds of the metal clinking while it climbs. You remember all of the shitty news stories of roller coasters fucking up and you wonder “IS TODAY GOING TO BE MY DAY”. Then you fall. You just fall straight down and you can’t scream loud enough. You feel like you’re slipping out of your seat. And then there’s approximately 232832 more steep drops until you’re done. It’s a nightmare.

We went on more rides, mostly roller coasters, and ate more. JUST A NORMAL DAY AT A THEME PARK, I THOUGHT.

Until we encountered the “Swiss Bob Run”. On Europa-Park’s website this ride is noted as the following:

.
I want to talk about how much this ride is the worst. LITERALLY IT’S THE STUPIDEST ONE. Aside from going hysterical when I saw our friends, being two adult male brothers, have to sit in a seat together looking like they were forward-spooning, this ride gave me zero thrill.
.
Not wanting to permanently injure Borja, I took one for the team and sat in the back when it was our turn to go.
.

.
I’m pretty sure I exited that ride as a Barbie doll from the waist down, no fucking kidding.
.
Here’s why it’s the dumbest:
1.) Two people share a seat and whoever sits in the back gets their junk squished to pieces and the entire time you’re just wondering if you’ll ever be able to reproduce after this is over.
2.) The only thing wild about this ride is the crotch pain.
3.) Because if you have been on this ride your genitals are shrivelled up and dead now.
.
YOU SIT LIKE THIS and you can just tell how much this ride provides nothing but physical and emotional strain just by the looks on their faces:
.

.
No not them, I’m talking about the two in the back. These guys:
. 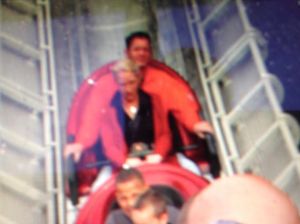 .
Their faces are covered in agony. He may never walk right again. She contemplates divorce.
.
And it is because of the above stated reasons that I strongly believe that the “Swiss Bob Run” is solely responsible for the continuing decline of birth rates in Germany.
.

.
So for some strange reason, this ride had one of the longest lines we had to endure during our entire time at the park. And more importantly, although it’s hard to believe, something even creepier and much more troubling occurs before you even get on this thing. While we waited in line, a part of our time was spent outside in just an average boring queue. Nothing crazy. Just a group of people standing around waiting to get on a terrible ride.
.
But then we began moving forward and eventually the line had to go through an indoor area which contained many rooms and even more regret.
.
And that’s where I saw it.

Why is there a human sized doll-man in a bed wearing a mask? Why does he sit up and look at me? Is that a dying cat? BUT WHY DOES HIS FACE LOOK LIKE THAT.

This one straight up looked me square in the eye for an uncomfortable amount of time.

WHY IS THIS HAPPENING. They need to be killed with fire. And apparently dusted.

These creepy moving dolls are also at the Weihnachtmarkt during Christmas. I saw them last year and they were pretty terrible but not as sinister looking as these ones at Europa-Park. And you can’t escape these ones. You are forced to stand and wait in these tiny ass rooms in line and look at them looking back at you. I don’t get it. And you’re rewarded with what? THE SWISS BOB RUN???!!!?

Besides my brush with evil, Europa-Park was pretty good. 10/10 would rollercoaster again.

Things I would do differently next time:

Bring a whistle and see if the Geese follow me

I need to document things because my memory is so shitty.